The new sparse frame implementation allows the storage of Blosc2 super-chunk data chunks sparsely on-disk, using the filesystem as a key/value storage. This mimics existing formats like bcolz or Zarr. 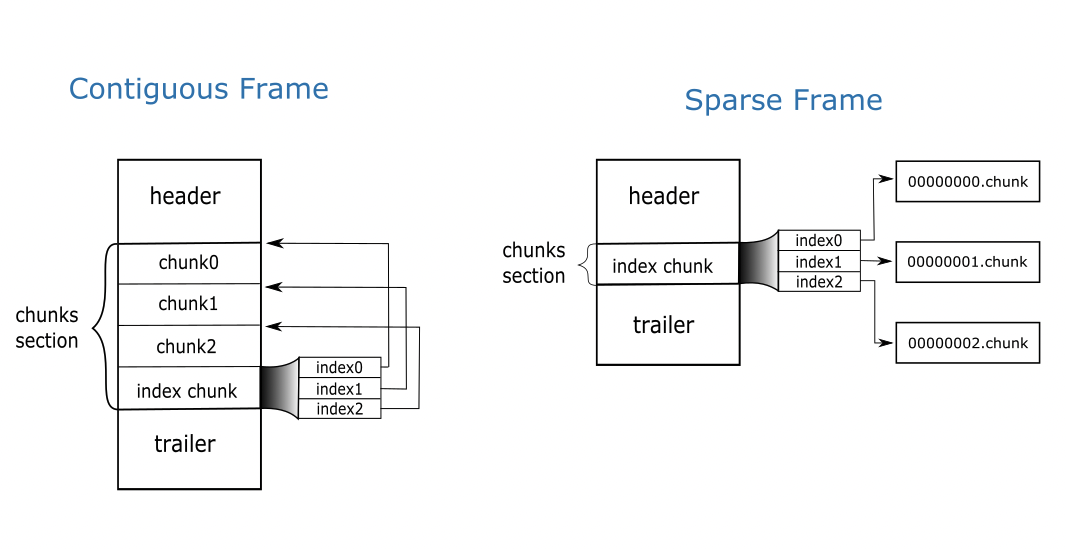 However, in a sparse frame the chunks are stored somewhere as independent binary files. But there is still the need to store the information to decompress the chunks as well as a place to store the user meta data. All this goes to the chunks.b2frame, which is actually a contiguous frame file with the difference that its chunks section contains only the index chunk. This index chunk stores the ID of each chunk (an integer from 0 to 2^32-1). The name of the chunk file is built by expressing the chunk ID in hexadecimal, padded with zeros (until 8 characters) and adding the .chunk extension. For example, if the index chunk is 46 (2E in hexadecimal) the chunk file name would be 0000002E.chunk.

The big advantage of the sparse frame compared with the contiguous one is avoiding empty spaces resulting when updating a chunk.

To better illustrate this, let's imagine that the set of the data chunks in a contiguous frame is stored like in the Jenga board game tower, a tower built with wood blocks. But in constrast to the genuine Jenga board game, not all the blocks have the same size (the uncompressed size of a the chunks is the same, but not the compressed one):

On the other hand, the chunks of an sparse frame can be seen as books on a shelf, where each book is a different chunk: 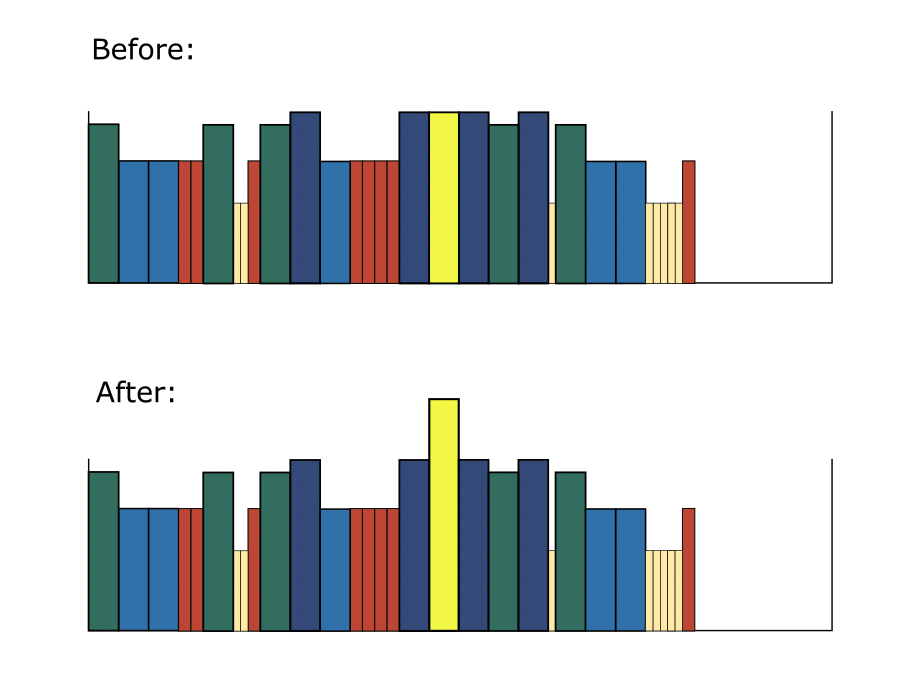 If one needs to update one book with the new, taller edition, one only has to grab the old edition and replace it by the new one. As there is no limit in the height of the books, the yellow book can be replaced with a larger book without creating empty spaces, and making a better use of space.

Creating a sparse frame in C-Blosc2 is easy; just specifify the name of the directory where you want to store your chunks and you are done:

The above will create NCHUNKS of chunks in the "dir.b2frame". After that, you can open and read the frame with:

You can have a look at a more complete example here.

We think that this implementation opens the door to several interesting possibilities.

For example, by introducing networking code in Blosc2, the chunks could be stored in another machine and accessed remotely. That way, with just the metadata (the contiguous frame) we could access all the data chunks in the sparse frame.

For example, let's suppose that we have a sparse frame with 1 million chunks. The total size of the data chunks from this sparse frame is 10 TB, but the contiguous frame size can be as small as 10 KB. So, with just sending an small object of 10 KB, any worker could access the whole 10 TB of data.

The remote stores could be typical networked key/value databases. The key is the identifier for each element of the database, whereas the value is the information that is associated to each key (similar to a set of unique keys and a set of doors). In this case, the key would be built from the metadata (e.g. a URL) plus the index of the chunk, and the value would be the data chunk itself.

This can lead to a whole new range of applications, where data can be spread in the cloud and workers can access to it by receiving small amounts of serialized buffers (the contiguous frame). This way, arbitrarily large data silos could be created and accessed via the C-Blosc2 library (plus a key/value network store).

Note by Francesc: The implementation of sparse frames has been done by Marta Iborra, who is the main author of this blog too. Marta joined the Blosc team a few months ago as a student, and the whole team is very pleased with the quality of her contribution; we would be thrilled to continue having her among us for the next months (but this requires some budget indeed). If you like where we are headed, please consider making a donation to the Blosc project via the NumFOCUS Foundation: https://blosc.org/pages/donate. Thank you!